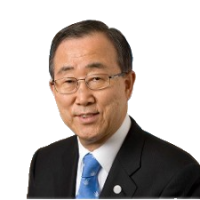 Ban Ki-Moon is a South Korean diplomat who was the eighth Secretary-General of the United Nations from January 2007 to December 2016. Before becoming Secretary-General, he was a career diplomat in South Korea’s Ministry of Foreign Affairs and in the United Nations.
As the eighth Secretary-General of the United Nations Ban Ki-Moon´s priorities were to mobilize world leaders around a set of new global challenges, from climate change and economic upheaval to pandemics and increasing pressures involving food, energy and water.
Under Ban´s leadership in 2015 countries adopted a set of 17 Sustainable Development Goals (SDGs) to end poverty, protect the planet and ensure prosperity for all as part of a new sustainable development agenda.
In 2017 Ban became chair of the International Olympic Committee’s Ethics Commission. The following year he co-founded the Ban Ki-moon Centre for Global Citizens.